A surprising, serendipitous turn of events - the making of a Nature Paper 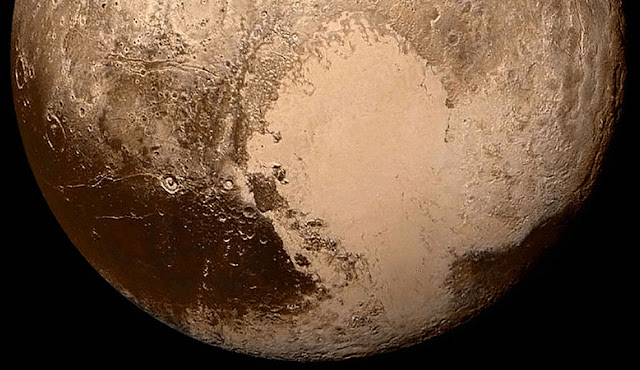 My new favourite planet (don't tell Mars!). This post tells the story of how the Nature penitentes paper came about. A previous post described our findings in plain language. I must apologize in advance, the length really got away from me on this one. But I hope the tale which follows is instructive for other early career folks in the planetary sciences (and other disciplines) who have a flash of inspiration that leads them towards high-impact publishing and who are not already members of science teams.

If you have to blame someone, blame Geoff Languedoc*.

Geoff is the Executive Director of CASI, the Canadian Aeronautics and Space Institute. It was at his invitation that I joined the organizing committee for the May 2016 ASTRO conference in Ottawa that set the whole of the development of this paper into motion. You see, it was the intent of last year's conference to reach out to the scientific side of Canadian space exploration and Geoff hoped that I could be a bit of a bridge to that community.

So, along with the CSA's Vicky Hipkin, I agreed to organize talks along planetary exploration lines and to help get out the word about the conference. Once the abstracts came in, I realized we had a bit of a hole in the program. While Mars, the Moon and Asteroids were well represented (with a smattering of talks from elsewhere in the solar system), the most exciting exploration target of the year, Pluto, was completely absent. So, I decided to jump into the lurch and talk about Pluto myself.

As for the specific subject, I had just the idea jelling in the back of my mind. The previous November, I had been to the American Astronomical Society's Division of Planetary Sciences Meeting in Washington, D.C. where the New Horizons (NH) team had presented their results. I, along with the rest of the Planetary Community, stood in awe as piece after piece of the puzzle that was the Pluto system was carefully laid into place by each successive speaker. The only parallel that comes to mind was the 2004 MER Opportunity session at LPSC, which laid out the case for an ancient aqueous environment on Mars.

The NH team had worked tirelessly for well over two decades to make this mission happen and their work had paid off in spades. We had thought we had Pluto figured out - after all, we had seen what appeared to be a captured Trans-Neptunian Object (TNO) before when Voyager 2 came calling on Triton in 1989. But nature loves to surprise us**, and Pluto was nothing like what we expected. Instead of a simple sublimation-dominated terrain, there was a rich geology. That is, with the exception of one enigmatic area - Tartarus Dorsa (TD). The parallel ridges seen here looked an awful lot like a supersized version of something called Penitentes which are seen on the Earth and this was one of the areas of Pluto which showed strong spectral signatures of the presence of methane ices.

Of course, the TD features couldn't actually be penitentes, or so I thought. Planetary science is littered with examples of two features on different planets that look alike, but are caused by different processes. But the timing to evaluate this idea was fortuitous: it just so happened that a few weeks before the conference, I had challenged my postodoc, Dr. Christina Smith, to review a mathematically dense paper written by Claudin et al. which described a mechanism to control the spacing of penitentes on Earth. As such, my idea was to apply this terrestrial model to Pluto, determine that these were not, in fact, penitentes (as expected) and I would have my CASI presentation.

However, something strange happened on the way to that presentation. The Claudin model, modified appropriately for Pluto, actually predicted penitente spacings consistent with what we actually saw on Pluto when using parameters consistent with Pluto's extremely thin, yet extremely stable atmosphere. Moreover, the model did not predict that penitentes would form at all in the more volatile Nitrogen ices elsewhere on the dwarf planet - also keeping with observations. When Christina performed analyses on the orientation of the penitentes, everything seemed to fall into place.

What to do? This is one case where success is more complicated than failure, because now we had an interesting and highly publishable result based solely upon the descriptions given in 3 papers in Science by a team of which we were not a part! After talking with two of my more senior colleagues at CASI (both of whom provided excellent advice), I decided to get in touch with the NH team and to share the result. I've worked on several space missions in the past and I certainly don't want to scoop anyone, certainly not a team who has put such tremendous effort into getting this mission approved, built, flown and then operated it for over a decade. But how would they feel about some random community member bringing forward something based on their data? And did they already have the same result that they too were about to release?

I needn't have worried. Once I heard back from them, the NH team contact I spoke with*** was a model of professionalism. While he too was preparing a paper discussing this region, it was different from what we were looking into and we both agreed to compare notes before submission of our Icarus papers later that summer, once we had fully worked up our results.

Why did that submission venue change? Well, you can thank a pair of dueling Nature papers that came out to much fanfare in June. These papers discussed the origin of the cellular terrain on Sputnik Planum (SP) as convection in the Nitrogen Ice. Interestingly, one came from inside the NH team, but the other was helmed by a couple of outsiders from Purdue University. It was fantastic work and it got us to thinking: if SP is Nature-worthy, would TD be as well? Christina and I decided to give it a go.

The problem was that I knew little of Nature's process. In 48 previous papers, not once had I been the senior author on so much as a submission to Nature. We decided that we had better be absolutely certain about our model before we proceeded. While we had confidence in our adaptation of Claudin and in our illumination model, the atmospheric pressure and temperature component was a weak link. I decided we needed to reach out to another group if we were going to go high-impact, and I knew where to go looking. I spoke with my contacts on MSL and found out that Dr. Anthony Toigo and Dr. Scott Guzewich had been involved with the adaptation of the Weather Research and Forecasting (WRF) model to Pluto and had something ready to go. I reached out and they joined our team. Their results did not end up changing our conclusions, yet gave us more confidence in our calculations. However, their addition would prove to be very fortuitous later on in the process.

By this point, August had rolled around and we were ready to submit. My team and I sat down and talked about it and we agreed that we needed the support of the NH team before we would be comfortable with going ahead. We had all worked space missions previously and know that, often, you are so busy actually running the day to day operations of the mission that you don't have the time to process your data. This is why missions have embargo periods.

So, with some nervousness, we decided to lay all our cards on the table and put ourselves in the hands of the NH team. We sent over the entire manuscript to our NH contact, asked him to circulate it and for the NH team to decide how they would like to proceed. We indicated that we were happy to submit to Nature or to a different journal, that we would welcome as many of them who wanted to come onboard as coauthors, or our work could be a contribution to something they were writing. I reiterated in my message that we wanted to proceed in a way that had the full support of the NH team.

To our delight, my contact got back to me and told me that after talking it over with others on the team there was no reason why we couldn't go ahead and submit.

While I won't go into great depth about the Nature review process, I will mention that I was surprised how much like a "regular" journal were our interactions. Though our editor was more involved than any other I can remember, it was entirely to the benefit of the end paper. Having Anthony and Scott along for the ride proved to be especially important. We ran into a thorny oversight (entirely my fault) early on in the review process. With their help, we pushed the atmospheric modelling back over many millions of years and to our amazement, rather than falling to pieces, the paper became even stronger.

That said, it has certainly been a white-knuckled, nerve-racking roller-coaster ride up to this point. There have been more than a few sleepless nights. In some ways, the publication on January 4th was a relief, even though I know that the public life of our work has only just begun. Already, I'm looking forward to LPSC where I'll present the results to the rest of the community, and hopefully not to too much rotten fruit thrown my way from the audience.

Those 1750 words are the most challenging I've ever written in my professional life. But I am proud of the result and of my team. The theory fits the available facts quite well and I hope I have done justice to the fantastic data collected by the mission and to their efforts to collect that data. Does that mean that there isn't another theory out there which fits the facts better? Of course not. But that's how Science works and if something better comes along, I'll cheer those results wholeheartedly. It has been an honour to be able to contribute to the Science of Pluto and I will be following the progress of the science results from NH closely in the years to come. Who knows, perhaps I've even got a few more contributions in me!
___
*This is, of course, tongue-in-cheek. Geoff is a fantastic person who has been nothing but helpful to me and a tireless advocate for Canadian Space for decades. If, by chance, you are actually upset over this paper, then the fault is entirely mine.

**I had a front-row seat to just such a surprise on another icy world, Titan, in January of 2005. Here we saw methane-eroded ices where we thought (albeit, based on seemingly robust terrestrial lab data) there would be none. I suppose I hadn't learned my lesson!

***As an important note for other early career researchers, I should emphasize here that it would be wise to contact as many people as possible on the mission individually, rather than trusting that your proposal will be circulated within the team. Do err on the side of over-contacting, even if you are speaking with a science theme group lead. This will save misunderstanding later on, and it is the one place where, if I had the chance to do it all over again, I would have made a greater effort.
Posted by ArcticSaxifrage at 5:35 AM

ArcticSaxifrage
The image shown is part of an illustration by Chris Gall (http://www.chrisgall.com/) from his book "There's nothing to do on Mars" and used in public presentations by the Phoenix Mars Mission. I decided to go with someting a tad more whimsical here - If you'd like to see a picture of me, head over to @ArcticSaxifrage on Twitter or look me up on ResearchGate